Beneficial use of biosolids as a supplemental fertiliser and soil amendment is one of the most common options for biosolids management. In New Zealand, application of biosolids on forest land is preferred than on agricultural land because it can reduce the risk of contaminants entering the human food chain and it can also increase tree growth and subsequent economic returns.

Treated biosolids from the Nelson Regional Sewage Treatment Plant have been applied to a 1000-ha radiata pine forest plantation at Rabbit Island near Nelson City since 1996. A research trial was established on the site in 1997 to investigate the long-term effects of biosolids application on soil and groundwater quality, tree nutrition and growth. Biosolids have been applied to the trial site every three years (1997, 2000, 2003, 2006, 2009 and 2012, respectively) at three application rates: 0 (Control), 300 (Standard) and 600 kg N/ha (High). Tree nutritional status and growth were monitored annually before 2011 and every 2-3 years afterwards, groundwater quality is monitored quarterly and soil properties every three years to determine both the risks and benefits and sustainable application rates as well. This biosolids research trial is unique both nationally and internationally due to the comprehensive and long-term assessment.

The application of biosolids to this research trial was terminated after 2012 due to a kōiwi issue. However, this trial still has considerable merit to assess the long-term and residual effects of repeated biosolids application on tree growth, health, and soil and groundwater quality. We hypothesized there would be long-lasting beneficial residual effects of biosolids-derived nutrients on tree nutrition and growth and biomass C storage through improved nutrient cycling in the ecosystem. The latest foliage sampling of radiata pine at the Rabbit Island biosolids research trial was completed in March 2018. Here we update our recent findings on the residual effects of repeated biosolids application on tree nutrition. Treatment means of foliar nutrient concentrations in 2018 are shown in Table 1. Biosolids application significantly increased foliar N and B concentrations, but reduced foliar Ca and Mn concentrations, which might be caused by growth dilution. In the Control treatment, foliar concentrations of all nutrients except N and Cu were in the “satisfactory” range of tree nutrition, indicating N was the main limiting nutrient for tree growth.

Foliar analysis has consistently shown that natural soil N supply in the Rabbit Island radiata pine was low, with foliar N concentration of the Control treatment (averaging 1.2% N) remaining consistently well below the satisfactory level of 1.5% N since monitoring began in March 1998 (Fig. 2). This indicates that without biosolids application, the radiata pine stand suffered from N deficiency and should benefit from N fertilisation. Overall, biosolids application significantly (P < 0.05) increased foliar N concentration of the Standard treatment to a marginal level (averaging 1.4% N) and the High treatment to a sufficiency level (averaging 1.5% N) (Fig. 2). 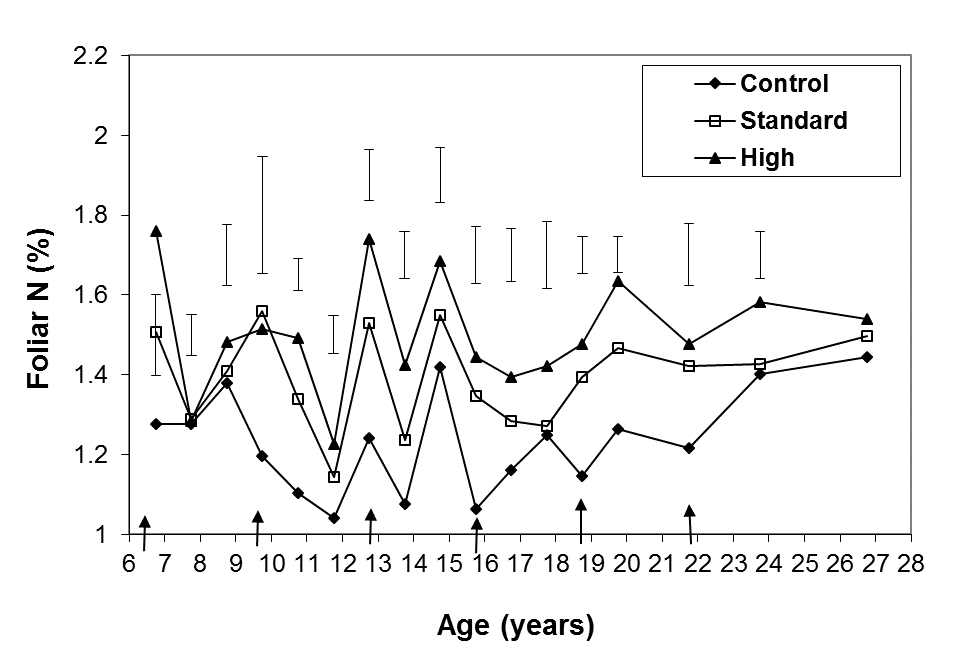 We concluded that repeated application of biosolids to a plantation forest on a poor site could significantly improve soil fertility, tree nutrition and site productivity without causing significant adverse impact on the environment. There were significant residual effect of biosolids applied in 2012 and before. Further monitoring is warranted to assess the long-term fate of biosolids-derived heavy metals in the receiving environment.