Greywater is all wastewater that originates from: bath, showers, hand basins and laundry sources. Water from these sources can potentially be reused  to water gardens, or flush toilets as an alternative to regular drinking water. Water from the kitchen sink is generally not considered as reusable due to the high number of contaminants (bacteria, fat, etc) it carries, although it is still greywater. Changing domestic lifestyles are driving an increase in water use, creating a need for sustainable options for reuse or disposal of the resulting wastewater.

Many regional and district councils are now considering alternative water management strategies, including rainwater collection and greywater diversion. However, no national legislation or guidelines currently exist for rainwater or greywater practices, and there is a lack of health risk assessment data specific to New Zealand conditions. Given the prevalence of unreported greywater re-use, the CIBR's greywater experts believe research needs to be conducted to address this. Adding clarity to the murky world of greywater reuse

ESR partners closely with Building Research Association of New Zealand (BRANZ) on greywater research throughout NZ. this study conducted in 2018 investigated the differences in the microbial quality of greywater from commercial and residential properties over a period of six months, with weekly samples of greywater from different sources (shower, laundry and sink) being collected for analysis for Escherichia coli (E. coli) and Pseudomonas aeruginosa (P. aeruginosa) and then compared to international greywater reuse guidelines. .There were two commercial buildings and eight residentail properties used in this study.

This study found great variation between samples of the same property and between properties and more research is needed to be conclusive. Recommendations for further work include a larger microbial water quality study, that also assesses environmental indicators such as pH, trace elements, C, N, P in soils, and emerging organic contaminants from household products, after continued and repeated irrigation with greywater.

It would also be of interest to be able to compare eco-friendly only product use with ‘normal’ household product only uses, with no mixing of the two. This will enable researchers to look at the effects of products with and without antimicrobial properties, and the effects of purported environmentally friendly products vs those with no claim of being environmentally friendly products.

This study looked at the effects of greywater re-use on septic tank system efficacy. Greywater diversion from a septic tank should alleviate the burden that is placed on a septic tank particularly those that are old and require maintenance. The study used two different residential properties – one that had a well-functioning septic tank and one that was in need of maintenance and underperforming.

Diversion of the greywater levels that passed through the septic tanks had positive effects on septic tank efficacy, particularly with the underperforming septic tank. Although reducing greywater load was beneficial for septic tank functioning, precautions still need to be taken when dealing with untreated greywater.

“Investigating Environmental and Health risks of Greywater water use in New Zealand” was a master’s thesis completed by Morkel Zaayman in 2014, which looked at the environmental impacts of triclosan use. Triclosan is an antimicrobial contaminant commonly found in toothpaste, hand-wash that can ultimately end up in greywater.

The study looked at different soil types that were irrigated with greywater containing triclosan and E. coli – this was used as a microbial indicator species. The aims of this study were to investigate the effects of triclosan on both soil health and microbial community health but also the public health risk related to triclosan and E. coli leaching into the soil.

For all of the soil types that were tested, triclosan and E. coli were present in the leachate which can then lead to groundwater contamination and as such is a public health risk. Triclosan also negatively effects the number of microbial communities present in the soil and microbial biomass. 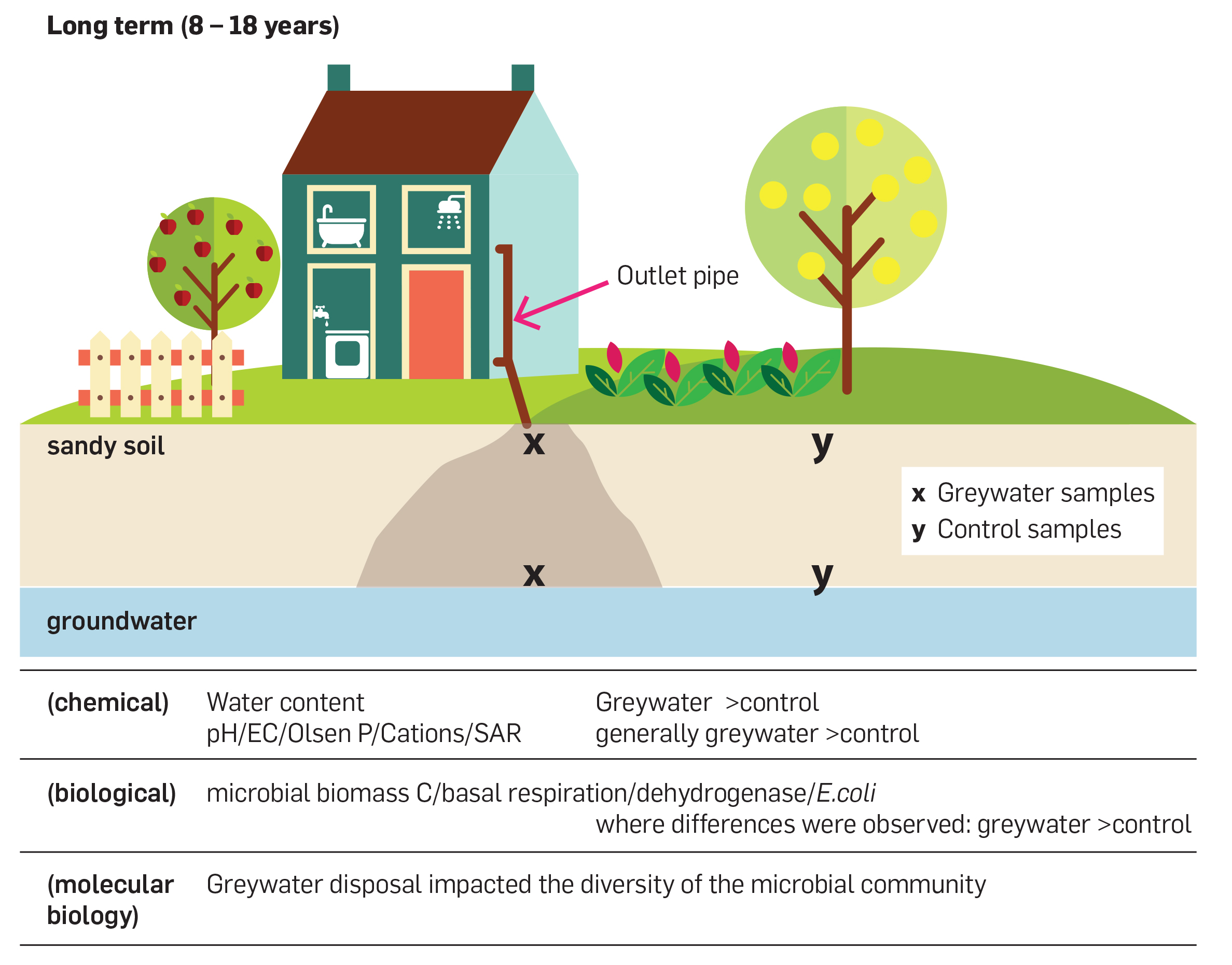 The study looked at the environmental health risks and groundwater contamination risks associated with long term (up to 20 years) greywater disposal on soil. This was performed as a case study using a community that were regularly disposing of their greywater onto land.

The study demonstrated that the long term disposal of greywater had both positive and negative effects on the environment. The positive effects were increasing plant growth through an increase in microbial biomass and enzyme (dehydrogenase) activity, whereas the negative effects of greywater disposal relate to the increased levels of pathogens such as E. coli which are a risk to human health. So although greywater disposal onto land is beneficial, it should be applied to land using methods such as sub-surface irrigation to minimise risk.

This paper was published in 2016(external link).

This project investigated the survival ability of the indicator organism E. coli in mulch that had been spiked with synthetic greywater. Greywater can be distributed in gardens via sub-surface irrigation and garden mulches are used as a common cover over the soils.

Three types of mulch were used for this study; pea straw, coconut husk and a bark based mulch. Each mulch was subject to three conditions: a freshwater control, E. coli solution and synthetic greywater + E. coli.

This study demonstrated that there is potential the spread of microbial contamination from greywater to the soil layer covers, that should be considered to safely re-use domestic greywater.

This paper was published in 2017(external link).